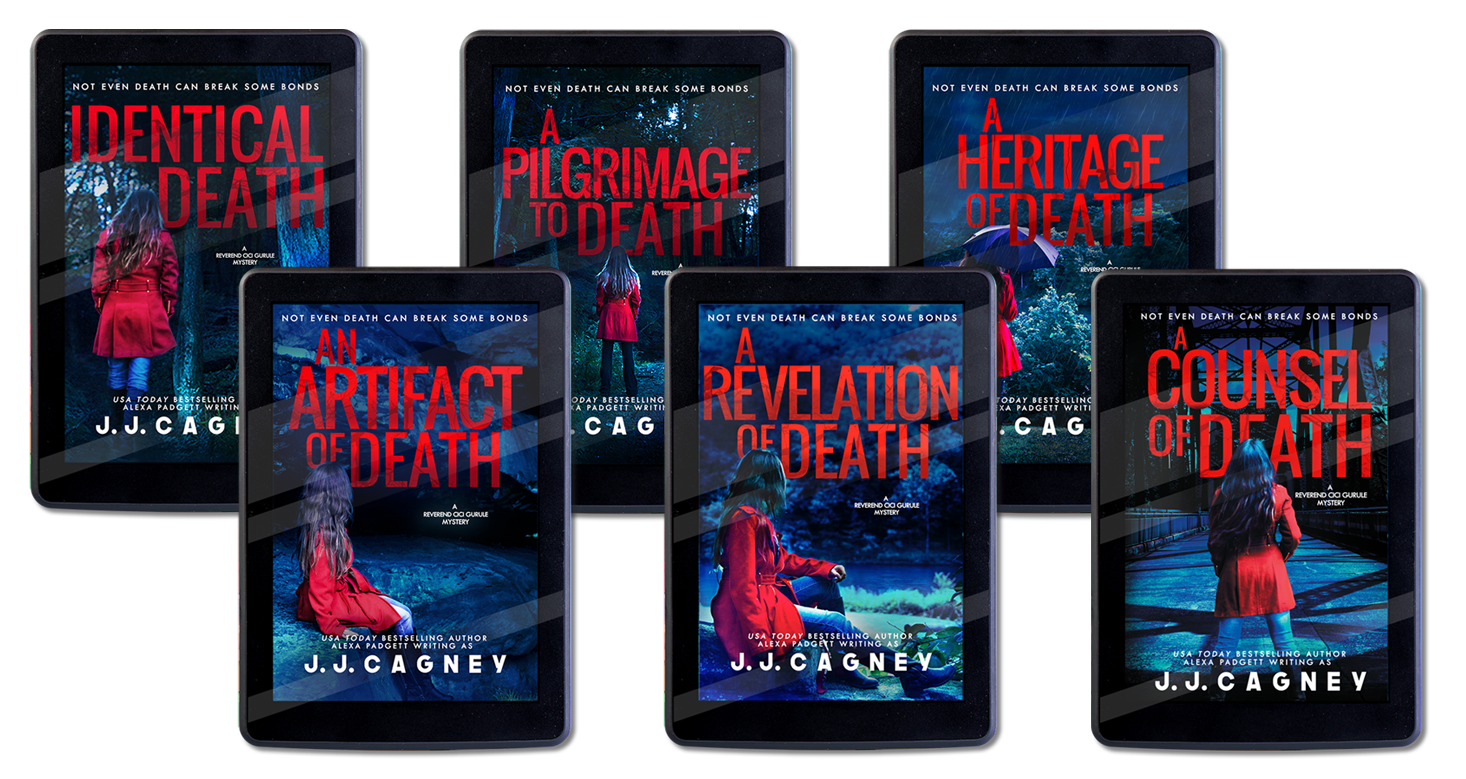 All 6 e-books for ONLY

How To Get Your E-books

1. After reviewing and then completing your purchase, you will get an email with the subject “Hey there, your book has arrived.” It looks like this: 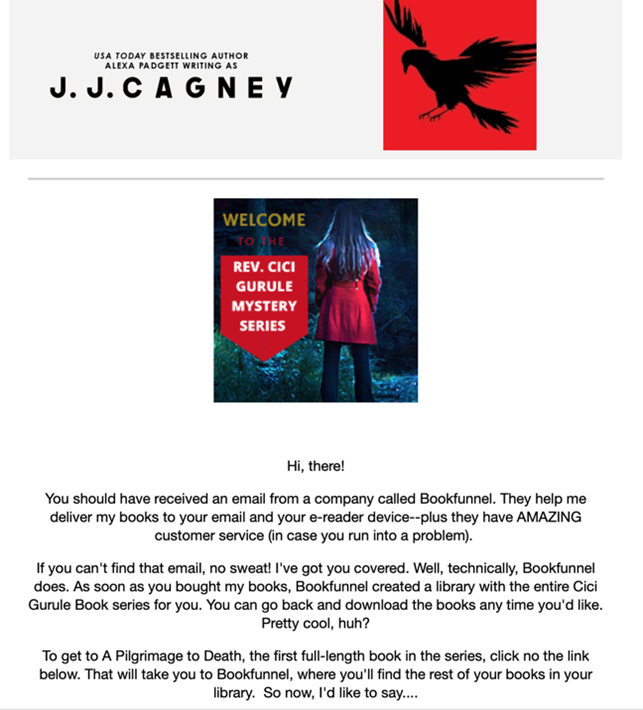 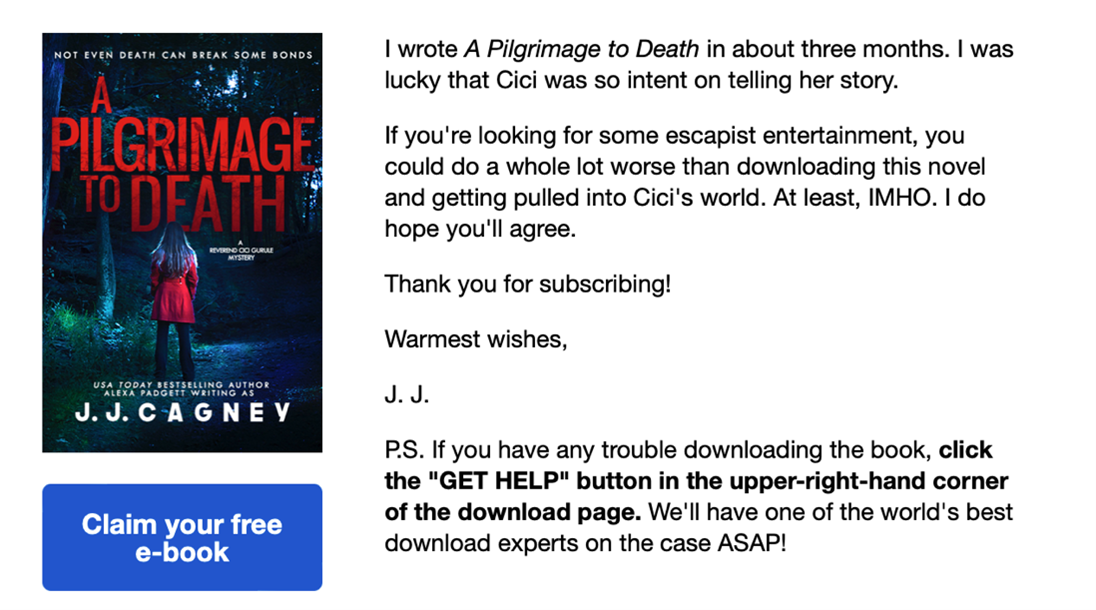 3. The link will take you to BookFunnel, the book delivery platform. Once you are at the BookFunnel page, click “Get My Book.” 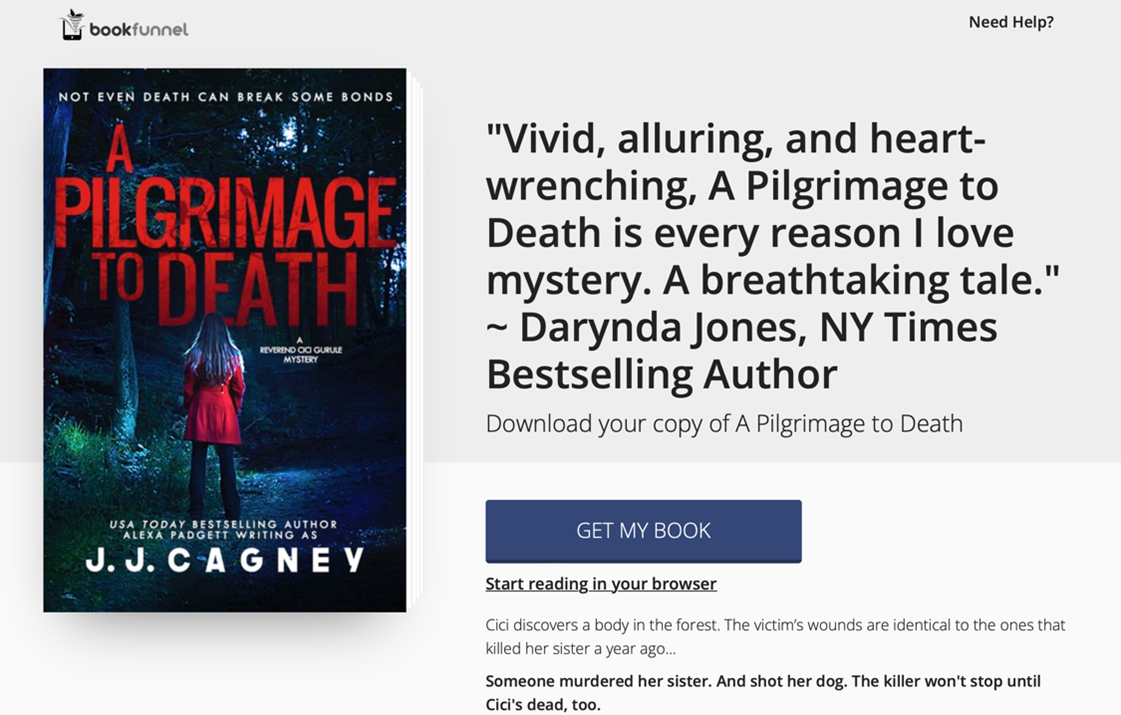 4. Select your preferred device where you’d like to read the book and follow the step-by-step instructions for downloading to your specific device. (iPad, Android, Kindle and more) 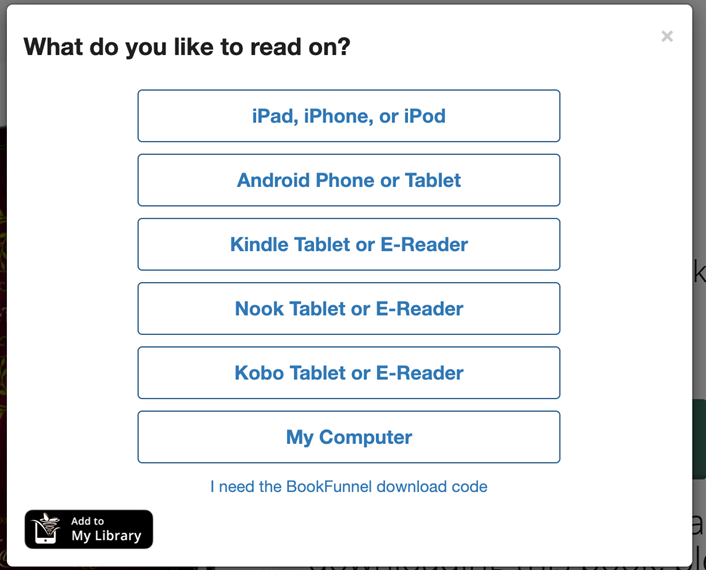 "Vivid, alluring, and heart-wrenching, Alexa Padgett’s A Pilgrimage to Death is every reason I love mystery. A breathtaking tale."

"A thriller read in one go, I immediately hooked to the captivating story, moving filled with suspense and twists. "

"Absolutely loved it. As soon as I thought I had it figured out something else came up!"

Cici discovers a body in the forest. The victim’s wounds are identical to the ones that killed her sister a year ago…

Someone murdered her sister. And shot her dog. The killer won't stop until Cici's dead, too.

With her identical twin sister haunting her dreams, Cici and her dogs must dodge arrows, bullets, and even a demon truck.

The chase is on. 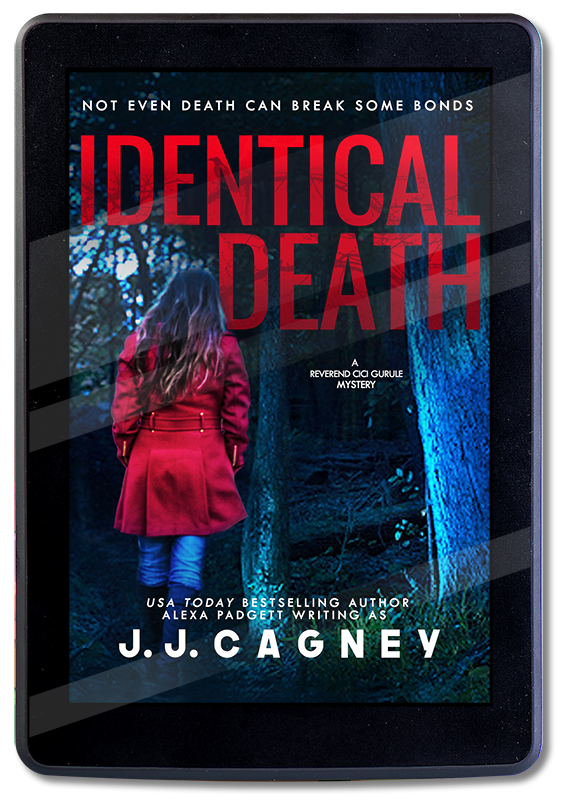 What turns a reverend into an amateur sleuth?

Few people have ever experienced a connection like the one Reverend Cici Gurule and her sister had.

The women weren't just twins; they were identical.

Cici knew the exact moment her sister had died because Cici had passed out in her apartment.

She'd swear until the day she died her sister said her name in a soft, broken voice as her own mind had switched off.
Now, Cici must learn to live without her sister . . . 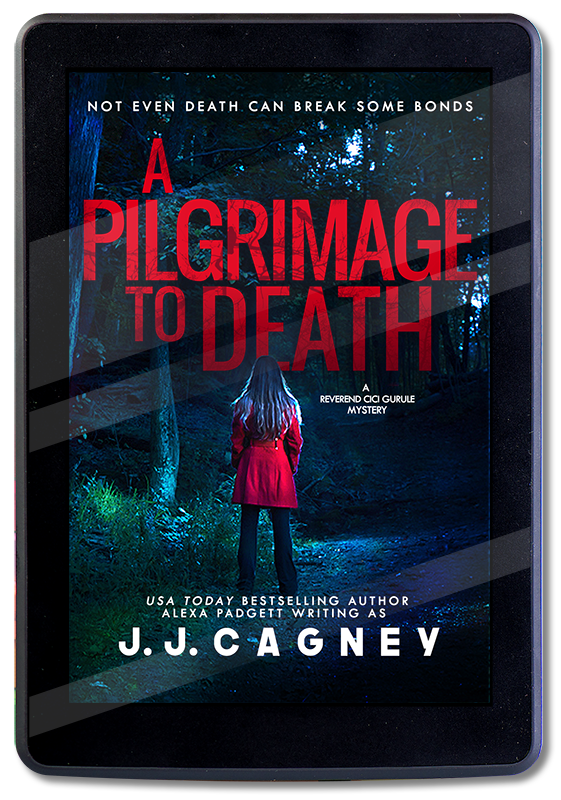 A Pilgrimage to Death

Cici discovers a body in the forest. The victim’s wounds are identical to the ones that killed her sister a year ago…

Someone murdered her sister. And shot her dog. The killer won't stop until Cici's dead, too.

With her identical twin sister haunting her dreams, Cici and her dogs must dodge arrows, bullets, and even a demon truck. Worse, she must grapple with the knowledge her twin's death was much more sinister than a random act of violence.

The chase is on.

As Cici and Detective Sam Chastain edge closer to the truth, the murderer circles closer. This time, the criminal plots to stop Cici. Permanently. 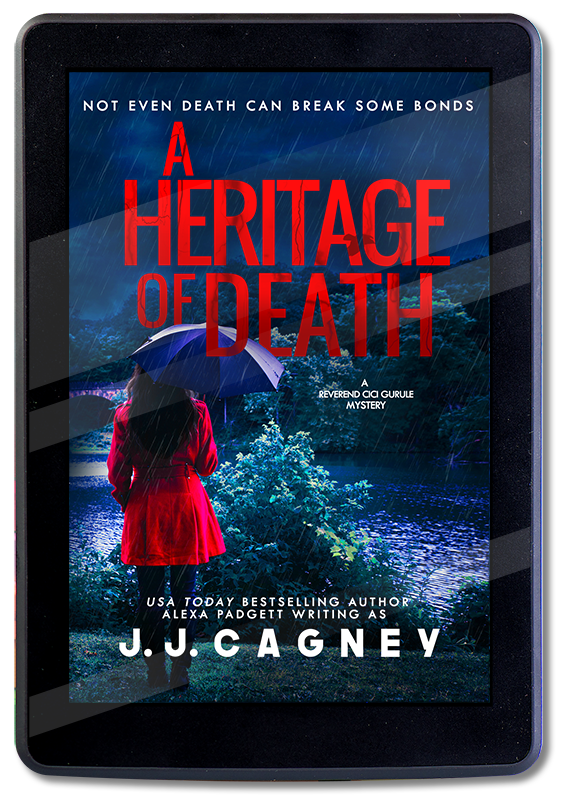 A Heritage of Death

An Artifact of Death

Reverend Cici Gurule went to the sacred Chaco Canyon in search of a sign. She's been offered a once-in-a-lifetime opportunity in a megachurch, but taking the position would mean abandoning her Southwestern home and the man she's grown to love as much more than a friend. She's so caught up in her thoughts that she doesn't realize when she stumbles upon a group of heavily armed operatives on the verge of an execution.

Soon, Cici's dodging bullets and scaling mesas with the mysterious man she saved from certain death. With a little help from her twin sister's ghost and restless ancestral spirits, they venture deeper into the maze-like rocky terrain. But her new companion's deadly aim makes her wonder if she can afford to trust his side of the story.

To make it out of the canyon alive, Cici must unearth the true story behind the man and a sacred Navajo artifact before the next blood shed on sacred ground is hers. 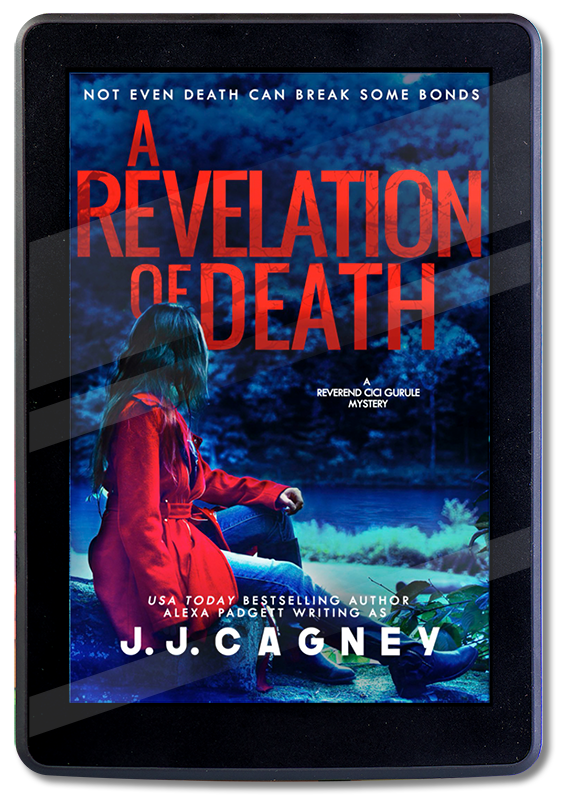 A Revelation of Death

Soon, Cici Gurule dreams of other women’s attacks, thanks to visions from her dead twin. The victims’ watery graves torment Cici, feeding her growing fear of water.

The killer targets Cici’s congregants and friends, taunting her and her lover, Detective Sam Chastain. Sam partners with the SFPD to investigate the widening web of assault, death, and pain… all while Cici struggles with the choices she made in Chaco Canyon.

When the killer lures a teen girl from her family, Cici and Sam’s desperation to identify him becomes critical. But the clues, from the disappearance of Sam’s ex-lover, to a cat with a chilling message for Cici, are leading them further from the truth, rather than toward saving the kidnapped girl. 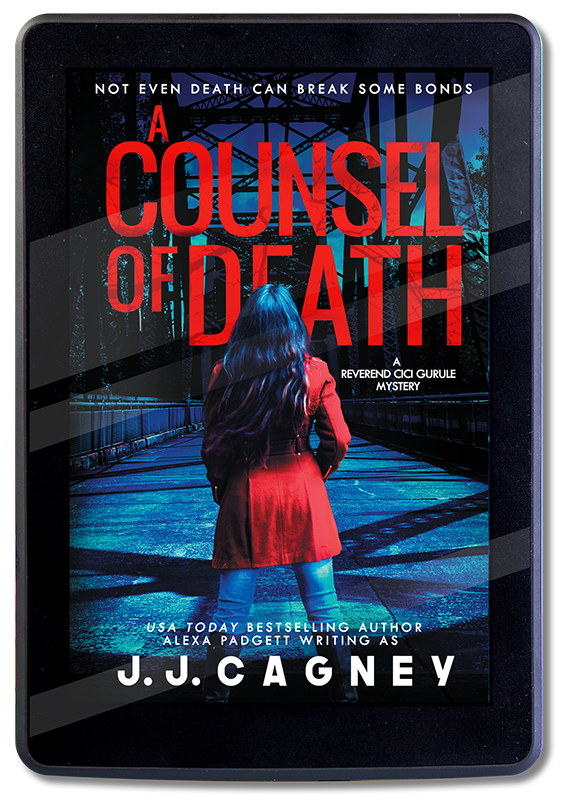 A Counsel of Death

He thought he was investigating money laundering, but the case is far more menacing. It’s murder…

Detective Sam Chastain has been dreading his next case: he must investigate his father-in-law’s role in a federal money-laundering scheme. When a grisly murder reframes the case, he must find answers before he loses another witness.

At the same time, new evidence sheds light on the decades-old drowning death of Cici’s uncle. She’s one of the few tenuous threads that connects the two murders. And a brand new one.

As Sam and Cici race to uncover the identity of the latest victim, they realize the killer never leaves loose ends… Like Cici.

Can you solve
the mystery?